Guest blog from our friends at Lincoln & York

Nitro cold brew is cold brewed coffee royalty. Imagine a cold brew coffee...now imagine it wearing a sequined robe and jewell ridden crown (metaphorically speaking). Consider the robe to be the immersive cascading effect caused by millions of microbubbles and the crown to be the frothy head that sits on top of the creamy cold brew coffee. Visually, it’s compelling. Experiencing it is spellbinding.

Nitro cold brew really is the kind of cold brew coffee that commands attention and admiration (if you can get the pour right).

What is Nitro Cold Brew?

First and foremost, cold brew coffee is the result of dedicated experimentation and a passion for all things coffee. Nitro cold brew is an extended result of such experimental commitment to create a refreshingly cold, coffee alternative.

Nitro, (short for nitrogen) is the catalyst of this coffee creation. 100% pure nitrogen is specially charged through the cold brew, infusing it so it transcends your taste buds to new realms of flavour and texture.

Nitro beverages are not a new invention and neither is cold brew. Although they may not be new, they are on the rise. In particular, drinks like nitro cold brew coffee have been touted as the future of the coffee market.

The perfect pour can depend on the beverage in question. However, when it comes to nitro cold brew coffee, comparisons have been drawn to that of Guinness. Regardless of this, there are certain characteristics we should all be looking for when preparing for the perfect pour.

A lot of what counts towards the perfect nitro cold brew pour are the astonishing aesthetics created in doing so. This is what entices you. If that can be backed up by quality coffee, creative brewing and excellent expertise, the perfect pour should go as follows.

If you are to be successful in the perfect nitro cold brew pour, it’s important that the nitrogen is pure. 100% nitrogen - no more, no less. This will give you the optimum taste and texture by yielding the same smoothness and richness associated with hot coffee.

Whether your nitro comes from a tank or a dedicated nitrogen generator, the infusion is key. It may be that your cold brew is pre-infused (in a keg, for an extended period of time, under high pressure) or infused on demand (on route from keg to tap). Either way, the quality of the cold brew pour will be dependant on the amount of nitrogen that its been infused with and the consistency of it. It’s this detail which contributes to the aesthetics too, as well as the taste and texture.

The mesmerising waterfall of descending bubbles is an expectation of any nitro cold brew. Yet, it’s the quality of the cascade that matters when you’re on a quest for the perfect pour.

A couple of minutes worth of cascade enchantment is entry level stuff - anything less just doesn’t qualify.

As highlighted above, the nature of the cascade, be it vigorous and long lasting or futile and infrequent, is down to the nitrogen levels and how it’s infused. Another few factors which may improve your nitro show are clean and well maintained draft systems - any form of debri or residue build up caught up in the draft system will severely ruin your cascade.

The crowning feature atop of any nitro cold brew has to be a good head. Unlike a beer or a lager where you see tall foamy heads due to the carbon dioxide, the head on a nitro cold brew will be shallower, more dense and creamier.

Ideally, the fluffy head of your nitro cold brew will settle at around half an inch thick. It would be ambitious to expect anything more, as the microbubbles are just too micro in size!

Once the head has settled, it contrasts the cold brew coffee in colour quite wonderfully. The head should remain present for the entire period of consumption, giving you that creamy mouth feel everytime.

The greatest mistake you can make when wanting to create the perfect nitro cold brew is dismissing the vessel you’re pouring it into. The glassware is key for the performance of the cascade and head.

When searching for the perfect glass, there are a few things you should take into consideration…

Firstly, the shape of the glass. The shape has serious sway on the performance of your nitro cold brew pour. Any slopes or swells in the glass will determine where and how the microbubbles accumulate and operate. Certain shapes will cause the bubbles to catch along the edges of the glass rather than allowing them to rise freely to form the head.

Secondly, the style of the glass. The perfect glass for nitro cold brew is one which allows for plenty of free movement for the bubbles throughout the pour, creating continuous cascades. A firm favourite would be a tall, slimline cylinder. This style glass encourages a consistent cascade and a defined head, as it doesn’t taper.

Finally, because the microbubbles are the essence of any texture or enhanced flavour, it’s important to respect them. Don’t allow a dirty glass to attract bubbles, forcing them to stick to anything present on the side of the glass. Even water droplets can impact on the quality of your pour, so make sure your glass is dry too!

Once you’ve cemented all of the above, the only aspect you have to rely on is the consistency and quality of your cold brew coffee.

Heaps of expertise, experience and experimentation has been invested into our cold brewed coffee to make it a tasty, refreshing and versatile cold brew offering! 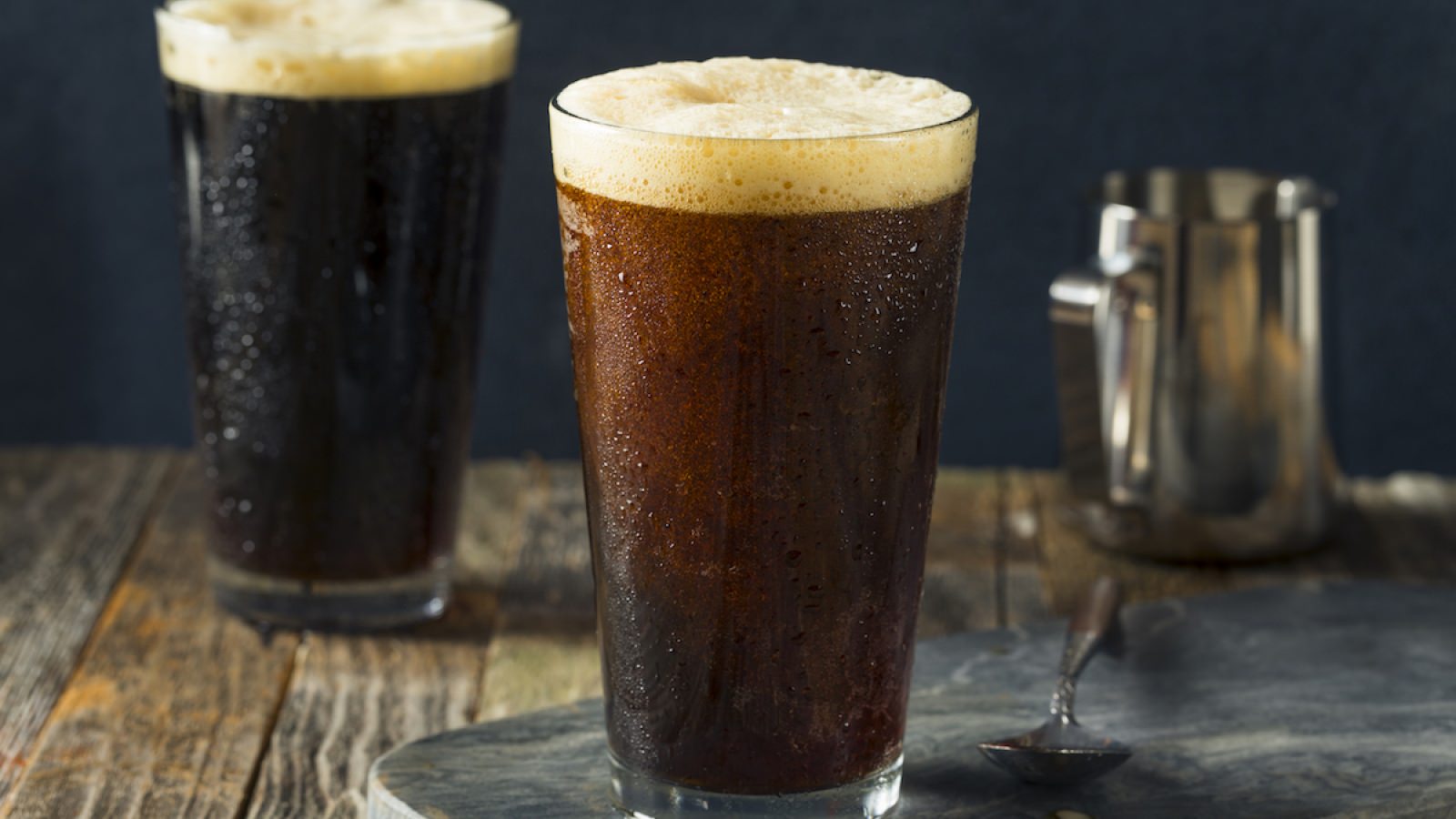 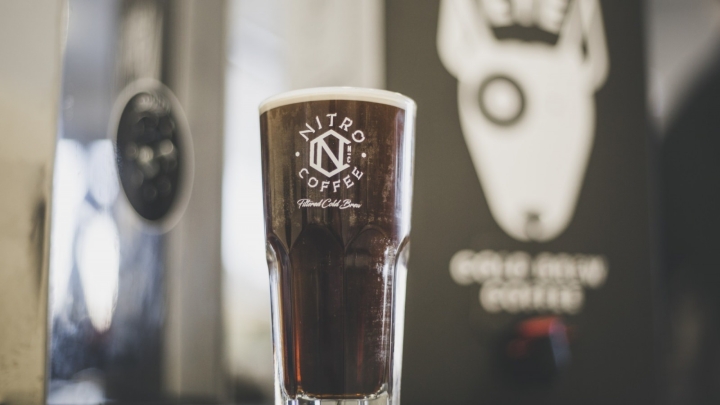 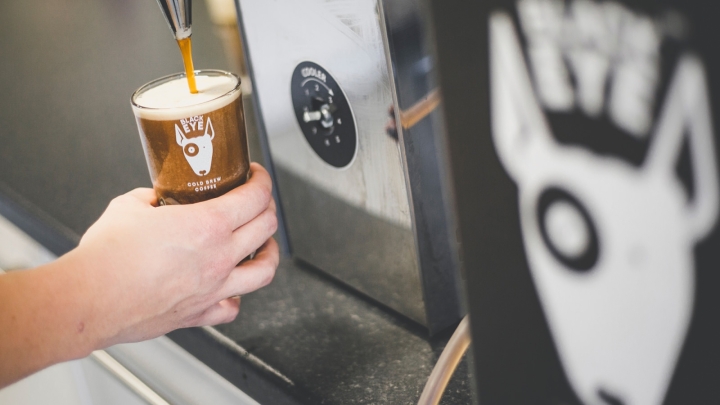